We got a sprinter! After the untimely demise of the Chevy Vansion due to a deer suicide, we decided we were going to go big on the next one. Pay off a bunch of stuff and buy a brand new(ish) van in the spring was the plan. Then Sean Simonson came along. (Sean is the guy that was kind enough to tow the Chevy home for us from the wrecking yard after the wreck, by the way). Sean knew we were keeping our eyes out for a new van, and he happened to spot one. 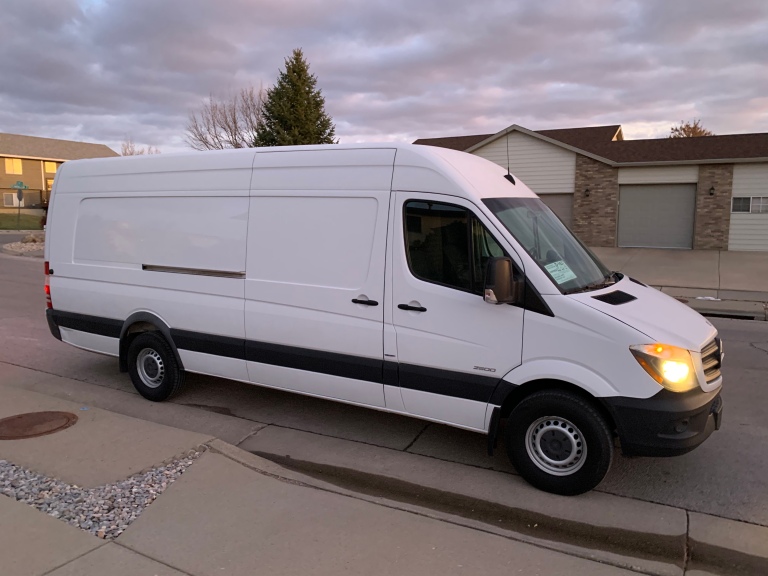 I’m sitting in front of a computer at work and got a call from Sean, saying he spotted a Sprinter at a dealership on Deadwood Avenue. Since I was already sitting at a computer, I looked it up. The van he called about wasn’t a fit. Yes it was a Sprinter, and a bonus was that is was a 4×4. After some closer inspection I saw that it just wasn’t going to work for us. Too much tear down and reconfiguring, plus it was too short and too expensive. I appreciated the lead but it wasn’t for us. I scrolled through the rest of their inventory and stumbled across another van. What did i come across but another Sprinter!

This one was a 2015 Mercedes Sprinter 170″. A little long but not out of the question. We kind of had our hearts set on a Dodge Promaster but were willing to explore other options if they presented themselves. I took a screenshot of the post and sent it to Gotcha. I figured she wouldn’t be interested, but she said she would be willing to go look. I was on a 48 hour shift and couldn’t run down to the dealership, so she went to check it out. She reported back that it was very nice and extremely clean, but SO big. We were used to a Chevy van, and this was a huge sprinter that you could actually stand up in! To make life easier, there is already some ugly plywood up on the walls, which will make it even easier to put up our own covering.

Already long story short- after my shift, we went and looked at it together, went over finances, and decided that we could pull this off. After some haggling where the dealer would NOT budge (understandably, because this was a killer deal) it was ours. Everything just fell into place perfectly. We made sure to have a “if it is meant to be, it will happen” attitude throughout the process, and everything just seemed to work out perfect.

So here we are- learning from our old van plus YouTube university on how to build out a van that’s about double the size. So far we have managed to get up the insulation in the walls and a draft game plan for the layout of the van. The goal is to make it functional and practical without sacrificing our minimalistic principles. My daughter is convinced that our plan of having running water (a sink) in the van is contradictory to the “dirtbag” persona, but we’ve decided we’re okay with it. 2-3 weeks a month with filling water out of jugs can get old when you can just save up a few bucks to buy a water pump from the RV store and a sink from the secondhand hardware store. I’m sure the original gangstas at Camp 4 would have jumped at the opportunity if they had it!

So here we go. 1″ foam board against the walls, spray foam around that. Fiberglass batting in all the void spaces (I know, I know; we shouldn’t use fiberglass… We’ll live. Calm down) and reflectix on top of all of it. Now to decide on the wall finishing. Panel or tongue and groove?

Time will tell…. I hope you all stick around to see what we come up with!